Summit Avenue is one of the best preserved historic streets in the country, and it is important to ensure that Summit Avenue remains a viable corridor for motorists, bicyclists, and pedestrians for generations to come. What is being proposed in The Summit Avenue Master Regional Trail Plan is not what's best for the future of the Avenue.

If you value protecting Summit Avenue, its mature trees, parking, existing on-street bike lanes, and more, please sign the petition, and let the decision-makers in charge of this initiative know how you stand on the issue.

Thank you! Your submission has been received!
Oops! Something went wrong while submitting the form. 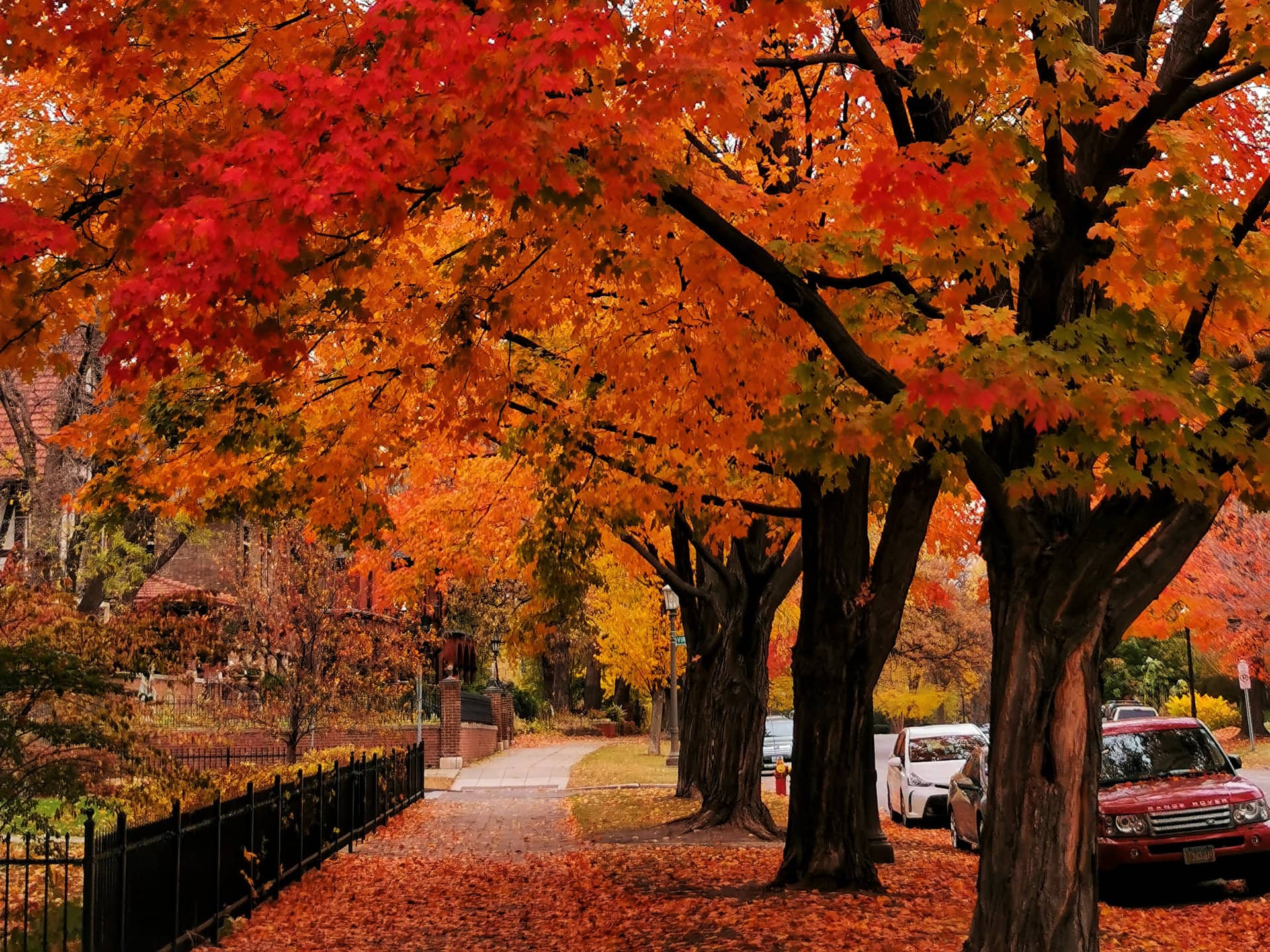 The Summit Avenue Master Regional Trail Plan is currently being drafted, and feedback is requested from citizens. Preliminary design guidelines were released by the City on May 25th, 2022. A draft master plan is expected in late August.

One of the stated goals of the City's current plan is to "limit impacts to greenspace and trees" and "limit impacts to vehicle and parking functions". However, design concepts released to date will impact these facilities. We are at serious risk of losing one of our most valuable resources, our mature trees, considerable parking (50% or more, in areas), our existing on-street bike lanes (preferred by many cyclists), all while creating significant safety issues.

Summit Avenue brings tremendous value to Saint Paul and the region as a tourist and visitor destination, and as an urban oasis for Saint Paul residents…. all because the community has made Summit Avenue one of the best-preserved historic streets in the country. If you value protecting Summit Avenue as a viable corridor for pedestrians, bicyclists, and motorists for generations to come, please join us.  Call your councilmember and let them know how you stand on the issue.

How Can You Help?

Beyond signing the petition above, we asked that all concerned citizens do the following:

Donate for the creation of yard signs and other initiatives.

Share your comments on social media using the hashtag #savesummitavenue

We encourage all members of our community to attend public meetings. Please preregister for all online Zoom meetings.

What Is Being Proposed?

While details have not yet been finalized, the City has released general details surrounding a number of proposed design guidelines for constructing the trail. These include:

There are solutions that exist that do not involve impacting either trees nor parking.

A Solution Searching For a Problem?

Who is this master plan intended to serve? Overall, what is the "point"? Is anyone in the bicycle community actually pushing for a regional trail on Summit? Why aren't other corridors, such as Marshall Avenue, being considered? St Paul’s Fall 2021 survey demonstrates that more than twice as many respondents wanted a connecting route on Marshall compared to Summit. Marshall Avenue connects directly to Minneapolis via the Marshall-Lake Street bridge.

How will the Regional Trail cross 151 driveways on the south side of Summit without significant disruptions? The City has stated that they will bring the driveways to the same grade as the trail, but is that realistic?

Summit Avenue is special and such a Regional Trail will put at risk what must be preserved.

Accessibility for our most vulnerable populations will be drastically affected if street marking is drastically minimized (at best) or reduced altogether west of Lexington (at worst).

The Importance of Trees and Green Space

Summit Avenue is an urban parkland in the heart of the City. While the proposed regional trail plan suggests minimizing impact to trees, the plan designers are not adhering to guidance from arborists with urban experience.

“Trees are our largest source of green infrastructure and enhance the landscape by providing shade to homes, roads and parking lots, and provide color, beauty and character to the community.

Trees also provide benefits behind the scenes, such as the interception and storage of rainwater and carbon, the reduction of noise pollution and have proven to reduce crime and stress.”

(From the City of Saint Paul's Urban Tree Canopy Assessment)

In addition, research has shown that trees and greenery have a positive effect on life spans.
‍
Outside of their visual appeal, research shows that trees:

Below are just a few of the safety and logistical issues that will arise if a separate Regional Trail is implemented:

How will driveways be dealt with?
There are 150+ driveways between Lexington and the Cathedral that have residents pulling out onto Summit that would intersect with a two-way bike paved/asphalt trail on the south side. This is not practical, especially considering the elevation changes between the trail and the driveways. An off-road trail will increase risks to cyclists by forcing them to cross hundreds of uncontrolled intersections with driveways and sidewalks; drivers are not used to traffic off the street and experience demonstrates this creates higher risk.
‍

E-Bikes and Electric Scooters‍
E-bikes and electric scooters travel at a high rate of speed (up to 28 mph), and they would be traveling alongside regular bicyclists and other pedestrians on the sidewalk. This is not necessarily a safer solution to what is currently in place.

Research Has Shown That Two Way Bicycle Lanes Are Not Safer

"...It's worth noting that there are some downsides to this type of infrastructure [2-way trails], however. Well, there's essentially one big downside. People in most countries of the world are in the habit of looking for oncoming traffic on their left when they are turning left, but two-way bike lanes result in bicyclists coming up from the far left on the back side. Copenhagenize's Mikael Colville-Andersen discussed this yesterday in an article that seems to be in response to the NITC findings but doesn't specifically mention the report. Here are some of his thoughts:

In Denmark, the on-street, bi-directional facility was removed from Best Practice for bicycle infrastructure over two decades ago. That in itself might be an alarm bell to anyone paying attention. These two way cycle tracks were found to be more dangerous than one-way cycle tracks on each side of the roadway. There is a certain paradigm in cities... I'm not saying it's GOOD, but it's there. Traffic users all know which way to look when moving about the city. Having bicycles coming from two directions at once was an inferior design.
This was in an established bicycle culture, too. The thought of putting such cycle tracks into cities that are only now putting the bicycles back - cities populated by citizens who aren't use to bicycle traffic - makes my toes curl.

He also references a December 2013 OECD report that advises against two-way bike lanes on the street. (Going through parks, the safety issues disappear of course.)

And he quotes Theo Zeegers of the Dutch national cycling organisation, Fietsersbond, in order to share his opinion on the matter: 'Bi-directional cycle tracks have a much higher risk to the cyclists than two, one-directional ones. The difference on crossings is about a factor 2. So, especially in areas with lots of crossings (ie. builtup areas), one-directional lanes are preferred. Not all municipalities get this message, however.'

The questions I'm left with are: Is it more worthwhile to attract people to bicycling than to build the absolute safest bike lanes? (Remember that bicycling also increases a great deal as ridership increases.) Is there any possibility two-way bike lanes could perform better in the US than in Europe? (I don't see why that would be the case.)

Mikael has a very clear opinion on this matter: 'If someone advocates infrastructure like this and actually believes it is good, they probably shouldn't be advocating bicycle infrastructure.'"

There are many challenges around implementing a separate trail on any boulevard on Summit Avenue.

Where will the snow from Summit, from the trail and from adjacent sidewalks go?  And will the trail really be maintained? There is an existing trail along 35E, the Little Bohemia Trail, that is not adequately maintained.

We cannot afford to minimize parking for Grand Avenue shops & restaurants, Summit Avenue churches and schools, Summit's many apartment residents, and more. Parking studies that are being referenced were conducted in the midst of the pandemic.

In 2019, Ramsey County drew $2.3 Billion in tourism spending. Summit Avenue attractions make up an important part of this.

A regional trail that changes the features of what the community has invested so much to maintain threatens the Summit Avenue corridor. The historic streetscape brings tremendous value to the city and region as a tourist and visitor destination.

Why else would the city and state tourism offices promote its features? And why are residents drawn to this green oasis like a beckoning mirage away from the hustle and bustle of commercial business districts?

All of these streets have at least lost a portion of their residential and historic character, except for Saint Paul’s Summit Avenue. The tree canopy, wide boulevards, slate curbs, and more greatly contribute to this historic character.

This stretch is in a State Historic District and in the Historic Hill District.

This stretch is in the Historic Hill District, a National Historic District, and a Local Heritage Preservation District.

Is The Current Bike Lane Set-Up Really That Bad?

No one disputes that the current roads desperately need to be improved, and that includes the bike lanes.

The current road conditions on Summit Avenue, including the bike lanes, are very poor. All residents would like to see improved roadways and it is hard to believe that everyone doesn't support better marked bike lanes. The lanes should be re-painted, and buffers should be added where possible, without reducing parking or greenspace.

Two-way trail poses a danger to bicyclists and motorists alike.

Letters: There has to be a better use of taxpayer money than elaborate bike paths on Summit Avenue

Letters: I strongly urge you to keep Summit Avenue protected

Letters: Pause the Cleveland Avenue project and reconsider it. We don’t need to kill that many trees.

Soucheray: Bike Trail Planning to befit a Sunbelt State. Which We're Not

What people are saying in the neighborhood. Share your comments below.

"Summit Ave is the bike commuters and bike riders best option.  The current set up is what is the best set up for riders of all ages and commuters. I ride Summit daily and have for 40 years as a resident of St Paul and as a business owner in St Paul.

Summit is a glorious street to ride for the serenity, the beautiful homes and the lovely tree lined median. Summit despite its bad surface, big bike lanes are safe and efficient, and we don't have problems with cross traffic and intersections. I see joggers/runners and dog walkers walking the median enjoying the green places, trees and the soil! We have a great place for all! A mixed paved path will ruin a pleasured running and walking surface and have a bad impact on our treasured street.

Let Your Voice Be Heard

With your help, we can preserve Summit Avenue.